Mom weaned me on Stan Lee and Jack Kirby comics when I was three, sitting on her lap in a small apartment in Ankara, Turkey.  Dad was in the Air Force.  First movie memory was a coming attraction trailer for the Batman movie with Adam West.  I saw my first film in a Turkish theater...King Kong Escapes.  Nothing like catching a little Japanese monster movie action in a theater in downtown Ankara, late 1960's.  That'll leave a mark.

Fell in love with words...stories...film...art...comics...the creative passions.
It was always my first love.  From staring at pictures of weird octopi in the Encyclopedia Britannica for hours on end to my instant addiction to the Doc Savage reprints from Bantam Books...those James Bama covers are insane...I was hooked on the fantastic, the strange, the mysterious, the fringe. 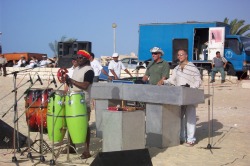 Here I am hosting a ski show in Marina, Egypt.  Funky little town on the Northern Coast.  I worked with DJ Yassir Shakir and some great musicians.  The show was a Stars of Florida Production - an amazing traveling band of water-ski warriors, mystical drinking shamans, and renegade cultural emissaries led by team captain Don Buffa.

My wife Cindy is incredibly beautiful, impossibly patient.  Sammi, my daughter, is my light.

Working in the creative realm calls for a soul that's open, hungry, and curious.  I bring that to my work...and I'll bring it to yours.